Wildlife on the Nanticoke

The diversity of forests, fields and shallow marshes provides suitable habitat for a number of rare, threatened or endangered plant and animal species. The Nanticoke River watershed harbors more rare plants than any other landscape on the Delmarva Peninsula.

To learn more, please click on a category to view some examples of the wildlife that can be found in the Nanticoke region:

American Bald Eagle – This species depends on large, mature forest blocks adjacent to open water for nesting, roosting, and feeding. Very sensitive to human disturbance, they require at least a quarter-mile buffer around a nest for successful breeding. The population has rebounded in the area since reaching record lows in the 1970s. As of 2012, there are more than 80 pairs of nesting Bald Eagles in the Nanticoke and Fishing Bay watersheds. 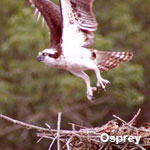 Ospreys – Ospreys breed in variety of habitats with shallow water and large fish, including boreal forest ponds, desert salt-flat lagoons, temperate lakes, and tropical coasts. In the Nanticoke River watershed, they are common throughout tidal portions of the river, feeding on fish such as menhaden and perch. They can only be found on the Delmarva during their summer breeding season, which lasts from early March until they migrate south around mid-August.

Great Blue Heron – An iconic bird of the Chesapeake Bay, the Great Blue Heron may be found along calm freshwater and seacoasts. They usually nest in trees near water, but colonies can be found away from water. Some may be found in the area year-round, although many leave for the winter, returning in February to breed.

Yellow-Crowned Night Heron – Their breeding habitat is swamps and marshes. They often nest in colonies, usually on platforms of sticks in trees or shrubs overhanging water.

Peregrine Falcon – These birds can be found throughout the world; in this region, these fast-flying migrators can be found on coastlines and around mudflats. They mostly eat birds, although they have also been known to steal various types of additional prey from other raptors. 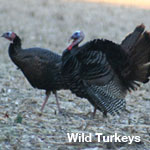 Wild Turkeys – Wild Turkeys, absent from the area for around 200 years, were released here and have established themselves. They have raised several groups of chicks, called “poults,” and have been observed in the fields and forests searching for insects and seeds.

Mallard – Mallard pairs form long before the spring breeding season and are generally monogamous. Pairing takes place in the fall, but courtship can be seen all winter. 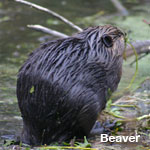 Beavers – Beavers are known for building dams, canals, and lodges. Their colonies create one or more dams to provide still, deep water to protect against predators, and to float food and building material.

Otters – Otters are expert swimmers and divers, swimming at an average speed of seven miles per hour and staying underwater for up to two minutes. Unlike muskrats or beavers, the otter barely makes a ripple when swimming or a splash when diving. Their specially built ears and nose have a valve-like skin that closes and keeps the otter watertight underwater. They are most active from dawn until mid-morning and again from early evening through dusk and may be seen year-round.

Muskrats – The muskrat is found in wetlands and is very successful over a wide range of climates and habitats. It plays an important role in the food web, as it is a food source for many other species, including minks, raccoons, owls, hawks, red foxes, and Bald Eagles. It is also a resource for humans, providing food and fur. The species was introduced into much of its present range.

Nutria – The nutria is a South American rodent that was accidentally introduced to the area in the 1930’s, resulting in considerable damage to the wetland and field areas where they roam. The species is also a serious competitor of muskrats. Fortunately, recent efforts to control nutria are achieving significant results. More information about the nutria and the eradication efforts is available from the U.S. Fish and Wildlife Service.

Delmarva Fox Squirrel – Once common throughout the Delmarva Peninsula, the Delmarva Fox Squirrel was placed on the federal endangered species list in 1967. This large, steel-gray squirrel has an unusually full, bushy tail. The population has begun to rebound in recent years, and the species is currently found in eight of the nine counties on Maryland’s Eastern Shore and in Sussex County, DE. The loss of suitable woodland habitat (due primarily to land clearing) is the major factor that caused the squirrel’s decline. Dependent on large tracts of forest with a variety of nuts and seeds for feeding, these squirrels prefer mature and old forests with open understories. More information about the Delmarva Fox Squirrel is available from the U.S. Fish and Wildlife Service. 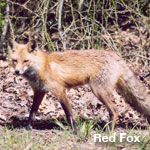 Red Fox – In the winter months, the red fox will den below ground. The rest of the year, red fox spend almost all of their time above ground, resting in the shade of corn fields during the day and prowling for food from dusk until the early morning hours. Red fox almost always den within a few hundred yards of water, whether it is a stream, a pond, or merely a marshy area from which water can be lapped after a heavy rain.

Grey Fox – The gray fox has the ability to climb trees. Its strong, hooked claws allow it to scramble up trees to escape predators, such as the domestic dog, or to reach food sources. It descends primarily by jumping from branch to branch, or by descending slowly backwards as a house cat. The gray fox is nocturnal and dens in hollow trees, stumps, or appropriated burrows during the day. 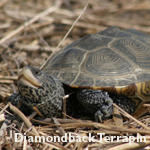 Diamondback Terrapins – The Diamondback terrapin is the only species of turtle in North America that spends its life in brackish water (salty but less so than sea water). Diamondbacks hibernate during the cold winter months, buried in the mud.

Snapping Turtles – Common habitats are shallow ponds, shallow lakes, or streams. Some snapping turtles may inhabit brackish environments, such as estuaries. They sometimes lie beneath a muddy bottom with only the head exposed, stretching their long necks to the surface for an occasional breath. Snapping turtles are omnivores, important aquatic scavengers and are also active hunters that prey on anything they can swallow.

Carpenter Frog – They can be found near wet land areas with heavy plant life, which they use for shelter. These animals tend to live in bogs and dense, slow-moving streams.

Frosted elfin – Weak fliers, this globally rare species of butterfly can be found in the vicinity of the wild lupine plant, its primary host. These butterflies hatch in early spring and lay their eggs on the leaves of the wild lupine in April and May.

Alewife Floater – One of the five rare species of freshwater mussels that lives in the Nanticoke watershed, these thick-shelled mussels live in silt, gravel, and sand. Their distribution correlates with that of the alewife, their host fish, which can be found throughout the Chesapeake Bay and its tributaries.

Northern snakehead fish – This invasive species has recently been found in both Broad Creek and Marshyhope Creek. These competitive fish share a similar habitat to that of the largemouth bass and may have the capacity to devastate fisheries, as well as amphibious populations. More information about the Northern snakehead fish is available from the Maryland Department of Natural Resources.

Rockfish – The official state fish of Maryland, rockfish, or striped bass, spend their adult lives in the ocean but return to freshwater streams to spawn. Young rockfish remain in their freshwater birthplaces for their first three to five years of life. Common throughout the Chesapeake Bay and its tributaries, the rockfish spawns from April through June.

Yellow perch – Yellow perch prefer slow moving or slack water, and can frequently be found in moderately vegetated habitat, especially among reeds along the shore and around docks and other structures. Their most active feeding time is dusk.

American Shad and River Herring – Once present in every river along the Atlantic Coast, shad now primarily spawn in three rivers: the Nanticoke River, the

Susquehanna River, and the Patuxent River. River herring (alewife and blueback herring) are currently in great decline, and there is a moratorium on the harvesting of these species. More information about American Shad and river herring is available from the Maryland Department of Natural Resources. 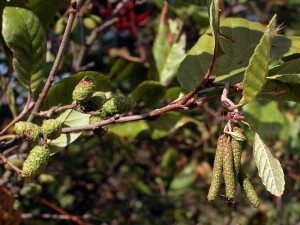 Delmarva alder – This globally rare species is endemic to the Delmarva Peninsula. It typically grows in areas along tidal freshwater streams. The species forms tight stands in places with full sun.

Box huckleberry – The only known surviving populations of this species on the Atlantic Coastal Plain can be found within the Nanticoke Rivere watershed. The species prefers dry, acidic soils. It is believed to be closely related to many species in South America., and historically it may have had a much larger range and distribution than it does today. Its current range spreads through only eight states (Pennsylvania through Tennessee). The species is slow-growing and has a low germination rate, which likely contribute to their vulnerability. The species is very similar in appearance to a blueberry and in fact are from the same family.

Wild lupine – This perennial prefers relatively dry areas with full sun, such as in grasslands or along roadways. Its flowers bloom in May and June and are typically blue, although some plants display pink or white blossoms.

Pitcher plants – These rare carnivorous plants have a deep cavity filled with a sweet-smelling liquid, which traps and dissolves insects. The plant then uses the nutrients from the dissolving insects for food. They typically live in wet, boggy areas with plenty of sun.

Parker’s pipewort – This aquatic plant lives in fresh to brackish tidal mudflats and estuaries. Growing no more than four inches high, they are often only visible at low tide.

White cedar swamps – Once prevalent in the Nanticoke watershed, now only remnants persist. These wetland ecosystems have high acidity and unusual plants. They are dominated by white cedar trees.

Phragmites – Also known as Giant Reed, this invasive species degrades marshes that have been disturbed or damaged by excluding native marsh grasses. The invasion of this species reduces plant diversity and limits productive marsh habitats, which in turn limits the habitats of wildlife and aquatic species that rely on the diversity of undisturbed marshes.

For more information on wildlife in Delaware, visit www.fw.delaware.gov//Hunting/Pages/wildlife.aspx 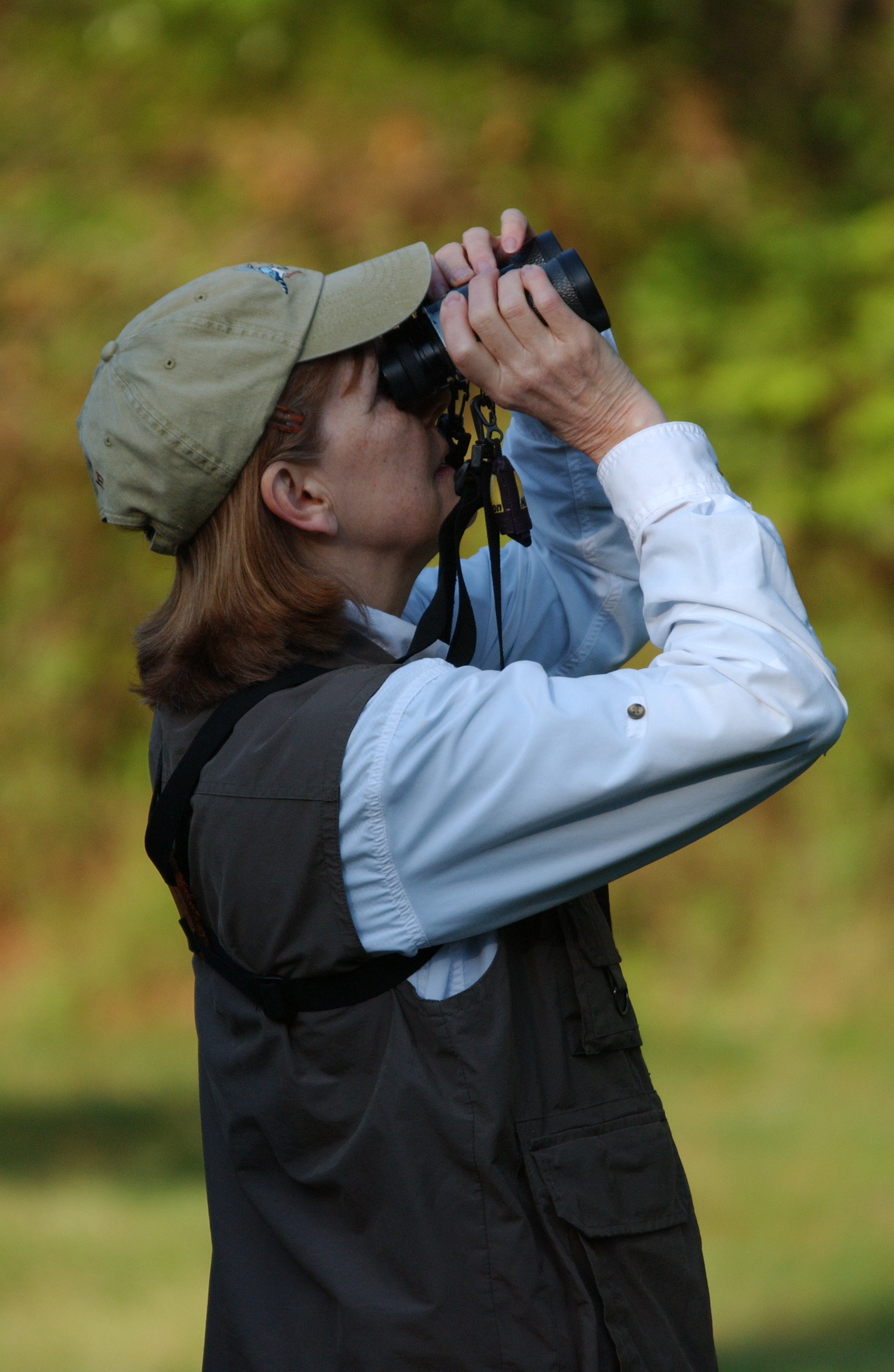 You can also follow Delaware’s Birding Trail into the Nanticoke regions. Visit www.delawarebirdingtrail.org

For more information on wildlife in Maryland, visit http://www.dnr.maryland.gov/wildlife/Plants_Wildlife/index.asp

For information about birds in Maryland, and about Important Birding Areas, visit http://md.audubon.org/birds-wildlife