Captain John Smith conducted two major voyages around the Chesapeake Bay during the summer of 1608, both starting from Jamestown, Virginia. 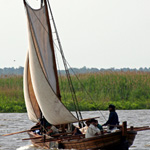 On his first voyage he traveled north along the Eastern Shore, exploring the mouth of the Pocomoke River and then traveling some distance up the Nanticoke River. He continued as far north as present-day Baltimore, before heading south along the western shore, exploring the Potomac during his return. On his second voyage, Smith went straight up the Bay to the mouth of the Susquehanna and present-day Havre de Grace, visiting the Patuxent, Rappahannock, and Nansemond rivers on his return trip south.

The objectives of these voyages included exploring the Chesapeake to find a route to the Pacific, finding ores suitable for mining, trading with and noting locations and populations of the Indian nations, learning more about the region from the Natives, mapping the area, and claiming new territory for England. Smith’s subsequent publication of a map of his voyages opened the Chesapeake Bay to European settlers, altering forever the face of the Bay and profoundly changing the lives of those around it. The surprisingly accurate map, incorporating the accounts of Chesapeake Bay Indians, and produced through Smith’s nautical and cartographic skills, was used for 100 years after it was made.

It was during Smith’s first voyage that he encountered the Nanticoke River and mapped this area as the territory of the Kuskarawoak, who were later to be known as the Nanticoke. Accounts of his foray into the Nanticoke River have been suggested by scholars using a combination of historical documents and modern technology.

The group arrived at the Nanticoke on June 8, and their exploration of the river took three to four days. During that time, Smith recorded and mapped 10 sites on the river, including Indian towns near both Lewis Wharf and Vienna. On his first day in the Nanticoke, Smith and his 14-man crew encountered a group of Indians on the eastern bank, most likely somewhere near Ragged Point. The Indians defensively fired a volley of arrows at the intruders’ 30 foot shallop. Smith anchored the ship out of range for the night. On approaching the land again the following morning, the English saw unarmed Indians with baskets motioning them in, and others hiding in the marsh, so the crew fired into the Indians, who subsequently retreated. That evening, the English found an unoccupied Indian camp and left trade goods there. The next day, Smith was able to befriend four Indians who had been away fishing and did not know of the previous encounters. With the help of these four men, he was able to meet the local Indians in trade, reporting later that they had high quality furs.

Although Smith provided no detail of his time with the Indians of the Nanticoke River, the detail of his map, including the upper reaches beyond where the English visited personally, imply a good deal of interaction with the Natives. Most likely he visited with the Indian leader at his town also noted by the name of Kaskarawaok, which was located north of present-day Vienna, on Chicone Creek.

Dr. Michael Scott, a geography professor at Salisbury University, used GIS technology to suggest which areas along the Nanticoke River Smith visited. Previous scholars had thought that Smith traveled only as far the confluence of the Marshyhope Creek and the Nanticoke. Scott used Smith’s maps from 1612 and 1624 and overlaid current images and locations of current towns. Scott’s research offers additional support to the theory that Smith traveled further up the Nanticoke and into present-day Delaware. While neither Smith’s accounts or maps are detailed enough to determine exactly how far he went, many scholars now think that he reached the confluence of Broad Creek and the Nanticoke before returning south.

Learn more about this research at http://viennamd.org/johnsmith_revisited.pdf

Also, author and Chesapeake enthusiast John Page Williams and the National Park Service, in partnership with the Chesapeake Conservancy and the Chesapeake Bay Foundation, published an extensive and downloadable Boaters Guide to the Captain John Smith Chesapeake National Historic Trail, which discusses the Nanticoke River on pages 88-94.

The Nanticoke River Water Trail is federally designated as part of the Chesapeake Bay Gateways & Watertrails Network and is a key segment of the Captain John Smith Chesapeake National Historic Trail.

The Nanticoke remains a very rural watershed and retains many of the physical and biological characteristics that existed when Captain John Smith first explored the river in 1608.